A Few Words About Pets And Furniture 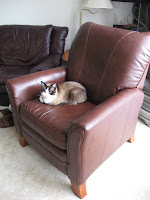 Just a small photograph of my cat, Stanley, seated comfortably on the roughly $1400 leather chair--it even reclines!-- we recently purchased for him.

(It is hard to tell pets to stay off the furniture when they look so darned cute on it!)
Posted by Jenny Drai at 7:02 AM No comments:

Apparently When You Are A Housewife, You Have To Do Housework.

That is so lame. I thought you just got to prance around the house and do projects.

What do you mean the bathroom looks dirty and the tomatoes aren't watered?

I am too busy being an artist to make you feel special.
Posted by Jenny Drai at 4:36 PM 1 comment:

Labels: Serious discussion about the future of our relationship

I Used To Be Sooo Smart 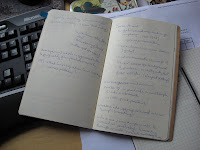 Other notebooks reveal an (obviously stymied) effort to learn to read Anglo-Saxon, a once-thorough grasp of the German language, and that I used to think about something called 'alterity,' the actual definition of which I can now never seem to remember. The grisly horror of all this? Apparently, when you don't use your mind, you can lose your mind. Here's hoping I can get mine back. In all seriousness. Here I have been one of those people who just put their brains out to pasture while they drift away in the light summer breeze. I had better start reviewing German verbs or something. Or some other mental daily mental feat. Brainteasers from the supermarket. (Of course, there have been weighty circumstances. But the circumstances are coming to a much longed-for end.)
So stand forth, impenetrable poetry. Come forward, dead language of our ancestors. I have tightened the screws where my head is connected to my neck and am fully ready for you once again. Thank you.
Posted by Jenny Drai at 8:30 AM No comments:

In Which I Now Have A Hobby That, Thankfully, Is Not Knitting 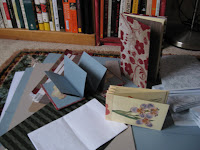 I would like to take this opportunity to say that I have nothing against knitting, per say, in the strictest sense of the word. It is rather with 'purling' that I take issue. I could knit until the cows come home if knitting alone weren't so (insert expletive) boring. For example, if what you want is a simple rectangular scarf made of one single kind of fibrous material (no stripes!) , then I am your woman.
(Unless of course you're my incredibly awesome boyfriend that I promise to knit a scarf for with yarn that you pick out yourself--despite being the only guy in the whole knitting store--and despite my deep, abiding love for you, I never get the project off the ground because, as previously stated, I find knitting boring.)
But the fact remains. Technically (if not emotionally), I am capable of knitting square objects. But do not turn to me for whimsical feathery fringe on some deliciously asymmetrical flaming orange-red example of craftsmanship like the shawl you (I) saw at the yarn store. I cannot make this. I am too incompetent. Also, please refrain from asking me to perform operations like 'knit two together' or this mysterious 'drop stitch' that all the knitting books are talking about, both of which are like pointy sharp objects horrendously disfiguring the delicate antique lace project of my knitting.

If you would like to knit your own underwear and bathing suits, more power to you.
Meanwhile I will be hitting up the local Michael's for every last scrap of fine paper to use in making some seriously imperfect handmade books--think: messy crime scene--walking past aisle after aisle of Mary Engelbreit scrapbook hell to find the two pieces of paper that I actually like.

But I think I just saw you (myself) on the other side of the store, admiring the yarn. Maybe we are not so different after all.
Posted by Jenny Drai at 6:53 AM No comments:

Labels: The Impenetrable Language Of p2c4fp4c4fp2

I Went Away For Awhile But Now I Am Back. I Was Nowhere. Nothing Happened.

My "novel" is spanking my butt raw. Oooh, oooh it hurts.
Posted by Jenny Drai at 12:53 PM No comments:

Last Night, For A Change Of Perspective, I Pretended To Be A Cat 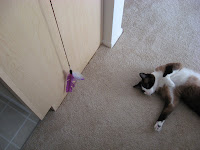 the inspiration for my lunacy

I chased a feather around on a stick. Thank you.
Posted by Jenny Drai at 12:04 PM 1 comment:

Once Again, I Find Myself Reading A Book About DESPAIR 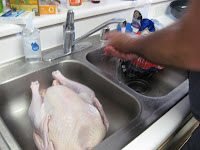 In other news, Steven and I at long last roasted our Thanksgiving turkey. Now there will finally be room in the freezer for leftover turkey a la king.

As for the book, it is awesome! (I am reading Miss Lonelyhearts by Nathaniel West, and, as I said, there is quite a bit of DESPAIR here on the part of the protagonist as he muddles his way through his job as the agony columnist for the local newspaper. And let me tell you, the letters he gets are plenty depressing. Plus there's Shrike, his jerk boss who spoils all his attempts to find redemption via religion, art etc. (So far I have only gotten to religion.) The description on the back of the novel promises something about 'death,' so maybe I will be 3 for 3. Ah. Death by one's own insanity.)

In still even other news, a reporter at the news conference yesterday asked the women from US Geological Survey if it was significant that the (7.2) earthquake happened on Easter Sunday. The USGS woman said 'no.'

My cat is doing well. Thank you.

Posted by Jenny Drai at 6:10 AM No comments: